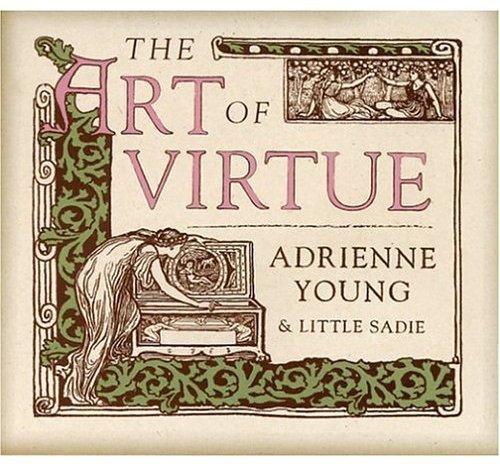 Sophomore album from this seventh-generation native of Florida, born in Tallahassee and raised near Clearwater. She formed a jazz band at age 18 and toured within Florida but moved to Nashville to surround herself with songwriters. While working as a temp, often on Nashville's Music Row, she gathered enough money to start working on demos, which evolved into her debut album, Plow to the End of the Row. She also won the Chris Austin songwriting competition at MerleFest 2003 in the bluegrass category. After finishing the first version of Plow to the End of the Row, Young formed a backing band, known as Little Sadie, and re-recorded the album with them. Young performs on both the guitar and banjo. Addiebelle. 2005.

"h3"Amazon.com "p"Adrienne Young amp; Little Sadie's The Art of Virtue is a fun, poppy country-folk album--more folk than country and more either than pop, but nevertheless accessible while remaining true to its roots. (There isn't a thing wrong with their renditions of the traditional "Farther Along" and "Bonaparte's Retreat"--this is a string band, featuring Young on clawhammer banjo, that knows what it's doing.) What really makes the album special, though, is Young's originals, whose earnestness it's hard not to get caught up in. Just try listening to the title track or "Jump the Broom" while sitting still. Another highlight is "Hills amp; Hollers," Young's elegy for the built-over American landscape ("There used to be hills and hollers here/Wild turkey and the white-tailed deer/Creeks runnin' crystal-clear/Water on its way to the Gulf of Mexico"). Like its predecessor, Plow to the End of the Row, the album is coproduced by the multitalented Will Kimbrough, who also lends his instrumental, compositional, and singing talents to many of the tracks. --Benjamin Lukoff

Our partners will collect data and use cookies for ad personalization and measurement. Learn how we and our ad partner Google, collect and use data. Agree & close