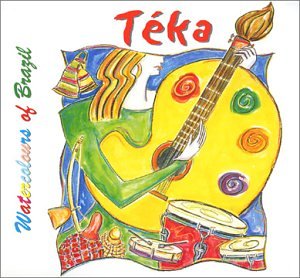 The rich palette of music styles that comes from Brazil. A sultry bossa nova journey.

JAZZ REVIEW Teka blends Guitar Skills With Her Velvety Vocals. Brazilian singer-guitarist Teka spends most of her time in the Santa Barbara area, making occasional forays into Los Angeles every month or so. When she does, the event is well worth seeking out--she is one of Brazil's most appealing contributions to Southland music.... But what makes Teka's work even more convincing is the manner in which she joines her instrumental and vocal skills. Like Joao Gilberto, she brought everything into a unified expression, combining her vocal lines and rhythmic guitar accompaniments into a single, elegantly buoyant musical blend. In the case of bossa nova era hits such as Samba de Uma Nota So and O Barquinho; Teka updated the familiar lines with brisk, jazz-oriented backing from bassist Randy Tico, drummer Kevin Winard and trumpeter-keyboardist Jeff Elliott. --LA Times (3,2005)

... a fine guitarist with a velvety sounding voice... an innate musicality that touched every aspect of her performance. Like JoÃ£o Gilberto, she brought everything into a unified expression, combining her vocal lines and rhythmic guitar accompaniments into a distinct buoyant musical blend. by Don Heckman --Los Angeles Times

TÃ©ka is an artist with roots firmly planted in Brazilian music.

Her music has become an interesting combination of the sensual rhythms of Brazil and Jazz.

Born into a very musical family, singing was part of growing up in Brazil. Very naturally, Teka fell under the spell of the choro, samba and bossa nova, and from an early age, she began soaking up the sounds of American Jazz.

Her studies include a degree in Music Education and Arts from SÃ£o Paulo State University, Jazz Studies at Berklee College of Music and Longy School of Music, as well as Improvisation and Flute. TÃ©ka has not only developed exquisite control over her warm vocals but she is also a refined guitarist accompanying herself with energy and charm.

Contralto, born in Londrina-Brazil, her credits span a wide variety of events, including some renown Jazz clubs, concert halls and festivals; as well as her home town The Santa Barbara International Jazz Festival for three consecutive years, sharing the 1999 night with the great Tito Puente and Lalo Shiffrin.

A 1993 nominee for the Boston Music Award for outstanding Latin Act, she has also performed and recorded with many artists. Among them, her husband composer PÃ¡ris Psaros on a CD entitled Garden Planet.

In a departure from Brazilian Jazz, she appeared as soloist with the Santa Barbara Oratorio Chorale in their 1995 California premiere and 1997 performances of Canto General by Mikis Theodorakis and Pablo Neruda.

TÃ©ka describes her music as New Bossa. Sophisticated as Bossa Nova and yet incorporating a more contemporary taste to it in her own unique way. A mix of undulating Bossa Nova and American Jazz.

TÃ©kaÂs route to the south cost came through Boston over a decade ago. Apart from been attracted to the city for itÂs famous music schools, she followed husband to be PÃ¡ris Psaros who was studying Music Composition at the New England Conservatory of Music. She later enrolled at the prestigious Berklee College of Music and started performing professionally. It wasnÂt lack of success that brought TÃ©ka west; it was the weather. ÂWe couldnÂt handle another winterÂ and PÃ¡ris had been accepted for a Doctorate Program at UCSB.

TÃ©ka, PÃ¡ris and their 5 year old daughter, made Santa Barbara their home where TÃ©ka performs most of the time and leads her own band. Her repertoire traverses Brazilian pop, American jazz and original songs.

On a given night, you might catch TÃ©ka and her group at Soho or at the Paseo Nuevo Shopping Center, or perhaps at the Lobero theather , or in a jazz club in Los Angeles. She and her husband have produced a CD entitled Garden Planet. Her new release, Watercolours of Brazil is yet another sample of the many tones Teka can present; from Cravo e Canela to Berimbau her control is always supreme.

Brazil, home of an infectious rhythm, the Samba, an enchanted city; Rio; and remarkable musicians you wonÂt soon forget: TÃ©ka.