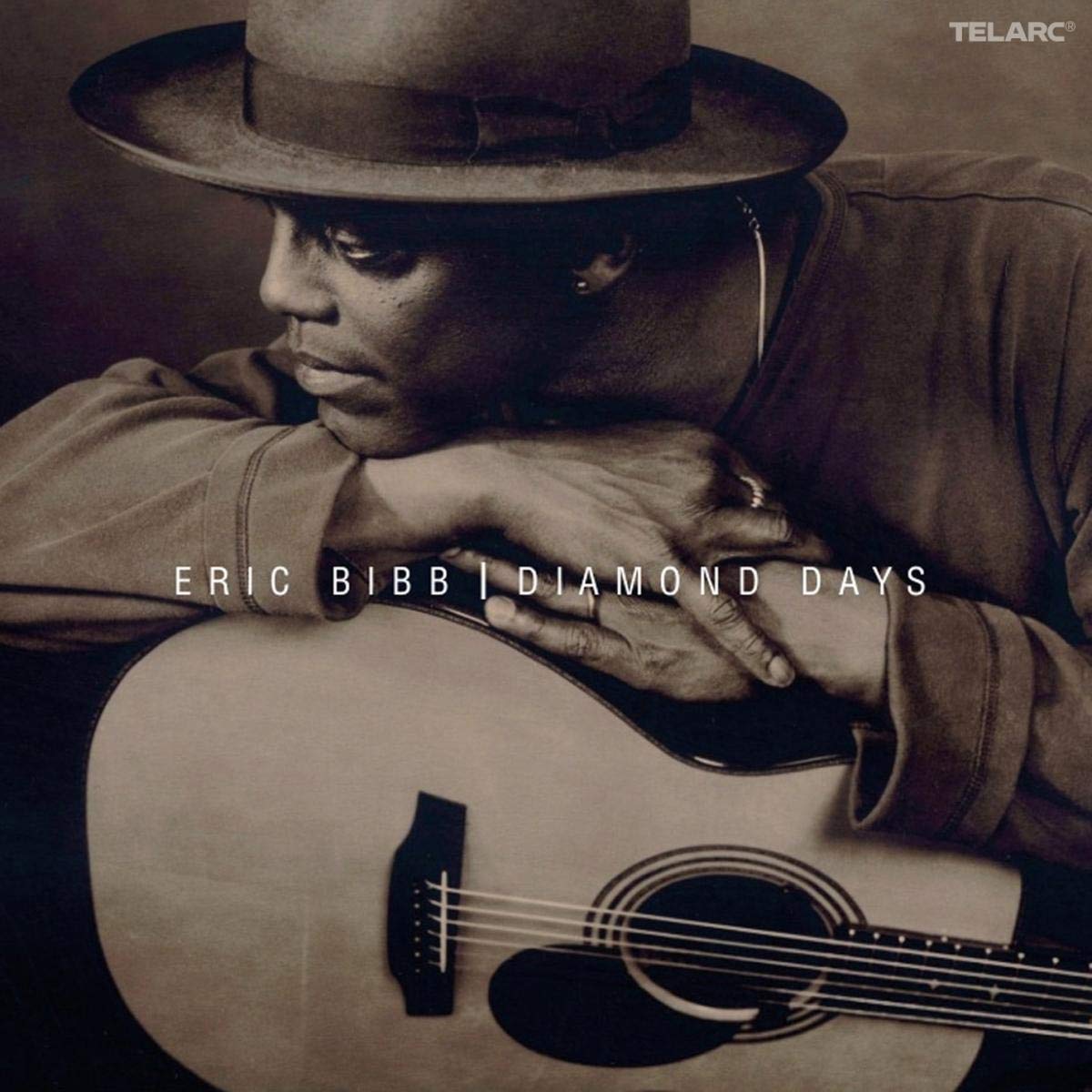 Time and again over the past three decades and beyond, Bibb has demonstrated his ability to not only capture those singular moments when the spiritual and the everyday come together, but also extract the priceless nuggets of truth and wisdom that emerge from those moments. Diamond Days is filled with just such gems.

The twelve-song set leads off with "Tall Cotton," a track whose title was inspired by a guitar maker friend in Canada, says Bibb. "As I was walking out the door of her studio, she said, `Man, you're walking in tall cotton,'" he recalls. "I said, `What?' She said, `My mother used to tell me that. It means you're doing fine. You're on top of your game.' So the expression eventually turned into a song." The track features Congolese guitarist Kahanga "Master Vumbi" Dekula, who plays in a distinctly African style. "For me," says Bibb, "to talk about tall cotton, which is a very southern American expression, and to connect it to African culture is musically, historically and personally very resonant."

Further in, "Story Book Hero" is a tongue-in-cheek tune reminiscent of the romantic ballads of the 1930s, when male singers would brag to the ladies about their masculine charms. "Smooth talkin' playboys may try an' get your number," Bibb sings, "but I wanna show you how good a man can be, I long to deliver your every heart's desire, Darlin' you're my destiny." The song closes with the singer rattling off names like Robin Hood, John Henry and other folk heroes who emerged from the collective consciousness of past generations to embolden the downtrodden. "It's intended as a spirit-over-circumstances kind of song," says Bibb, "but in a lighthearted way."

"Heading Home" is a song that Bibb considers very autobiographical. "My roots are really in American folk music in all of its glorious forms - from Southern blues and gospel to mountain music, bluegrass and country - and later on, the folk singers of the `50s and `60s who gathered all of that together and made their own statements," says the New York native, who has lived in various parts of Europe and the UK since the early 1970s. "The song is about being disillusioned in the late `60s," he says. "It's about finding a way to gather up those wonderful threads that made us so optimistic at that time, and try to bring it back home."

"p"Bibb ratchets up the energy to a near rapturous pitch in a live rendition of "In My Father's House," a driving, spiritually charged profession of brotherhood that's reminiscent of the soul classic "People Get Ready." On a more intimate scale is the earthy "Buckets of Rain," a song originally penned by Bob Dylan and delivered here in a cheery midtempo arrangement featuring guitarist Martin Simpson's intricate fingerpicking.

The closer, "Still Livin' On," is Bibb's nod to past masters and musical influences - Mississippi John Hurt, Elizabeth Cotten, Pops Staples and other heroes of blues and gospel whose spirit and influence still lives in their music.

On the good days as well as the bad, Bibb continues to channel these resonant voices from long ago and make them an integral part of his own music and world view. The lesson in Diamond Days is that the road of life is filled with peaks and valleys, and Bibb's sage advice is to accept it all with courage and grace.

"h3"Amazon.com "p"Calm, cool, and collected, folksinger Eric Bibb approaches his craft in a style similar to that of Keb' Mo'. His honeyed voice and clean acoustic guitar wrap around songs like a flannel blanket. Bibb's music is filled with hope and uplifting sentiments without being spiritually pedantic. "Forgiveness Is Gold" and "So Glad" tell their stories in the titles alone. Even the lowly shoeshine man can approach his job and life with exuberance ("Dr. Shine") as he helps others improve their lives in his own small way. While these feelings could be juvenile, or--worse--corny, in the wrong hands, Bibb's songwriting and presentation elevate the material with a persuasive professionalism and integrity achieved through a career that spans ten years and as many albums. Credit also goes to producer Glen Scott, who brings just enough changes to the mix. Occasional tuba, snare drum, muted trumpet, and his keyboards add deeper, richer shades to these smooth watercolor sketches. The disc's lone live track, "My Father's House," injects subtle rawness into the proceedings and is certainly a highlight. "Still Livin' On" name checks Mississippi John Hurt, Elizabeth Cotton, Rev. Gary Davis, Son House, and Pops Staples. It shows Bibb's dedication to, and love of, the folk/blues artists who have influenced and preceded him. The music and soul of these legends is imbedded in Bibb's own style that connects on this fine release despite--or maybe because--of its breezy, easygoing charm. --Hal Horowitz

"If one recording out of my entire catalog were to be selected as a self-portrait, Diamond Days would be the most accurate," says Bibb. "I'm hitting my stride, and I realize how fortunate I am to be able to say that. This album is an homage to the idea that hard work does pay off in some way or another, and that it's worth it to keep on keeping on."

Eric Bibb, already enjoying success in Europe, is becoming a familiar face - and voice - in the U.S. acoustic folk-blues scene. His unique talent continues to draw critical acclaim around the world. Twice nominated for the W.C. Handy Awards and winner of the "Best Newcomer" title in the British Blues Awards, Bibb has been appropriately described as "discreetly awesome" and "a total original." As his popularity escalates, earlier comparisons to legendary greats Ry Cooder and Taj Mahal are being replaced by quotes that speak to Bibb's ability to "use standard blues ingredients to cook up something all his own."

"p"Born in 1951, Bibb is a native New Yorker with deep roots in the American blues and folk tradition. He is the son of 1960s folk and musical theater singer and television personality Leon Bibb. His uncle was the world-famous jazz pianist and composer John Lewis, a member of the Modern Jazz Quartet. His godfather was singer/actor/activist Paul Robeson. Surrounded by major musical figures of the day, young Eric was inspired and influenced by Odetta, Richie Havens, Pete Seeger, Earl Robinson, Joan Baez, Bob Dylan, Judy Collins and many others. "p"Bibb got his first steel stringed guitar when he was seven. By the time he was in junior high school, he was consumed by music. When Bibb was 16, his father invited him to play guitar in the house band for his television show, Someone New. In later years, Bibb played guitar for the Negro Ensemble Company in 1969 at St. Mark's Place in New York City. He left for Paris at age 19, where he played in restaurants, then headed to Sweden, where he settled in the `70s. He returned to New York in the 1980s for a brief five-year stay, where he continued to write and opened for headliners such as The Persuasions, Sonny Terry, Brownie McGhee, Tania Maria and Etta James.

Bibb's first signing was to BMG/Sweden as a writer in the early `80s. He later signed to the independent Swedish label Opus 3, where he produced several albums. Two of these, Spirit amp; The Blues and Good Stuff, were later released in the U.S., which helped to expand Bibb's international audience. Bibb appeared at the London Blues Festival in 1996, and has toured the world many times since, appearing at festival and club dates in the U.S., Canada, UK and Europe.

"p"A performance by Eric Bibb is an enriching experience, both musically and spiritually. His music, like his personality, is intimate, assured and passionate, drawing listeners into the moment more as participants than as spectators. His rich and sensitive vocals and lyrics provide a perfect balance to his fine fingerpicking technique. Purveying a beautifully realized and deftly accomplished soulful and gospel-infused folk-blues, Bibb has no problem blending various genres effortlessly, melding a traditional rootsy American style with a subtle, contemporary sensibility. As one critic wrote, "Eric's singing and versatile guitar playing fuses a variety of genes to become a New World Blues."

Find out who are they!

The First Module of the “Climate Change, Peace and Security” e-course is now available!

UN Secretary-General Sent a Message to the UN CC:Learn Partnership

Toward a Clean Indonesia by Doddy Sukadri

Communicating on climate change in local language in Sri Lanka

Preserving biodiversity: Effective, lasting solutions based on science and innovation

How can we REALLY create educational initiatives that contribute to #adaptation and #mitigation efforts? Check it out on the upcoming #webinar organized by @FAOclimate. The event is open to everyone! Save your spot!👇👇

The third module of the "Mastering NAPs: From Start to Finish" e-course is now available! This module walks you through the ins and outs of how to finance a #NAP process. Take the full course today and get an official UN CC:Learn certificate➡️ unccelearn.org/course/view.ph…

#ClimateChange learning is imperative if we are to move towards a #sustainable future! Support us today and help make our e-courses more accessible to everyone by donating today ➡️ uncclearn.org/donate/

#ClimateChange affects us all, but in different ways. Several factors shape the ways people from different social groups experience its impacts and their associated #security risks. Interested? Learn more from our #CCPeaceSecurity e-course ➡️ bit.ly/2W1IzpX

#DYK that the NAP process was formally established under the Cancun Adaptation Framework at the 16th Conference of the Parties (#COP16) of the @UNFCCC in 2010? Learn everything there's to know about NAPs from our new e-course "Mastering NAPs"➡️ bit.ly/3AzZ1MY

Reducing #GHG emissions and improving the resilience and adaptive capacity of societies to the harmful impacts of #ClimateChange require significant financial resources.🌳💸 Learn from this e-tutorial how countries can prospect these funds ➡️ unccelearn.org/course/view.ph…