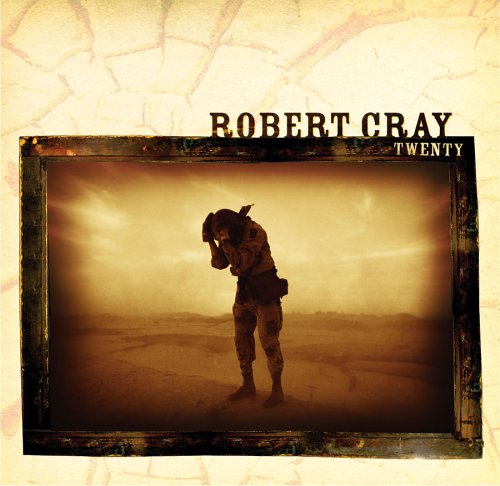 The new album combines the band's skills with legendary, Grammy winning engineer Don Smith (The Rolling Stones, Ry Cooder, Miles Davis) to craft an intelligent and sophisticated CD that draws from a diverse pool of influences to create a signature sound and a varied menu of songs.'Twenty', like its predecessor Time Will Tell, was co-produced by Cray along with Jim Pugh, his keyboardist of 16 years. BMG. 2005.

With his chocolaty cool, soulful Memphis croon and sure sense of melody, Robert Cray has never been considered a straightahead bluesman. His often interchangeable albums have instead stayed closer to Ramp;B, adding compact, stinging lead guitar to songs about matters of the heart. That formula remains, with minor variations, on Cray's 14th release, rather confusingly named "i"Twenty. The title track, a gripping, emotional anti-war ballad of the experience of a GI in Iraq (that, incidentally, doesn't contain the word "twenty") shows the singer/songwriter shifting his emotionally charged storytelling lyrics to the political arena. It's a brief but confident detour from his usual M.O. of relationships on the brink of collapse or in general disrepair, typically related in the first person. Subtle yet effective forays into loungey jazz on "My Last Regret" and even reggae on the opening "Poor Johnny" indicate a healthy tendency to push his established envelope, if only gently, into other genres.

But Cray sticks to his established bread and butter for the majority of this sturdy album, effortlessly churning out shoulder-swaying, foot-tapping Ramp;B accompanied by a clean, clear tenor voice and a road-hardened band that finesses these songs with the perfect combination of fire and ice. Old fans won't be disappointed, and newcomers can start here and work backwards. "i"--Hal Horowitz

"h3"Review "p""Cray is so incredibly soulfulÂÂ a treat for fans" -- "i"STL BLUES"br""br""Cray is so seductive-singing and playing guitar-fans will fall in love with him all over again" -- "i"Barnes amp; Noble (bn.com)"br""br""Cray reminds us of his fine feel for soul and Ramp;B." -- "i"Billboard Magazine, June 4, 2005"br""br""CrayÂs strongest album since Strong Persuader, itÂs encouraging to hear him sounding so on his game" -- "i"Rolling Stone magazine"br""br""it's great stuff, kind of like of Cray's other great stuff" -- POP Matters

CrayÂs sinewy guitar lines and soulful voice shine on songs about -what else?- jealousy, betrayal and love gone bad. -- The Sun, May 20, 2005

"'Twenty' is the way I feel about the move into Iraq instead of going after Osama Bin Laden," he says. "In the song, a young man joins the service after 9/11, questions the whole thing and winds up not coming home. Somebody was duped."

"The song is about an innocent young guy, who, after the events of 9/11, wants to do his part for his country," Cray explains. "He doesnÂt know heÂs going to end up in Iraq, watching the horror thatÂs going on thereÂand he ends up losing his life. ItÂs a subject that needs to be spoken about and is in some ways, a continuation of one of the songs we did on the last album."

"We decided to do it a little bit different this time," Cray says. "We cover a few more flavors. It's bluesier, jazz-tinged. And that soul thing is undeniable."

"p""I did my phase where I didn't listen to anything but blues," he says. "But there's a lot of good music out there. If I want some reggae or some old bossa nova, I'm gonna put in on. I can listen to Howlin' Wolf right afterwards and still groove."

"It's the emotion," Cray says of his first musical love. "After the song's over you go, 'That person understands what I'm talking about. I'm not the only one living this life.' That's what the blues is about: healing."

Happy 45th, Songs in the Key of Life