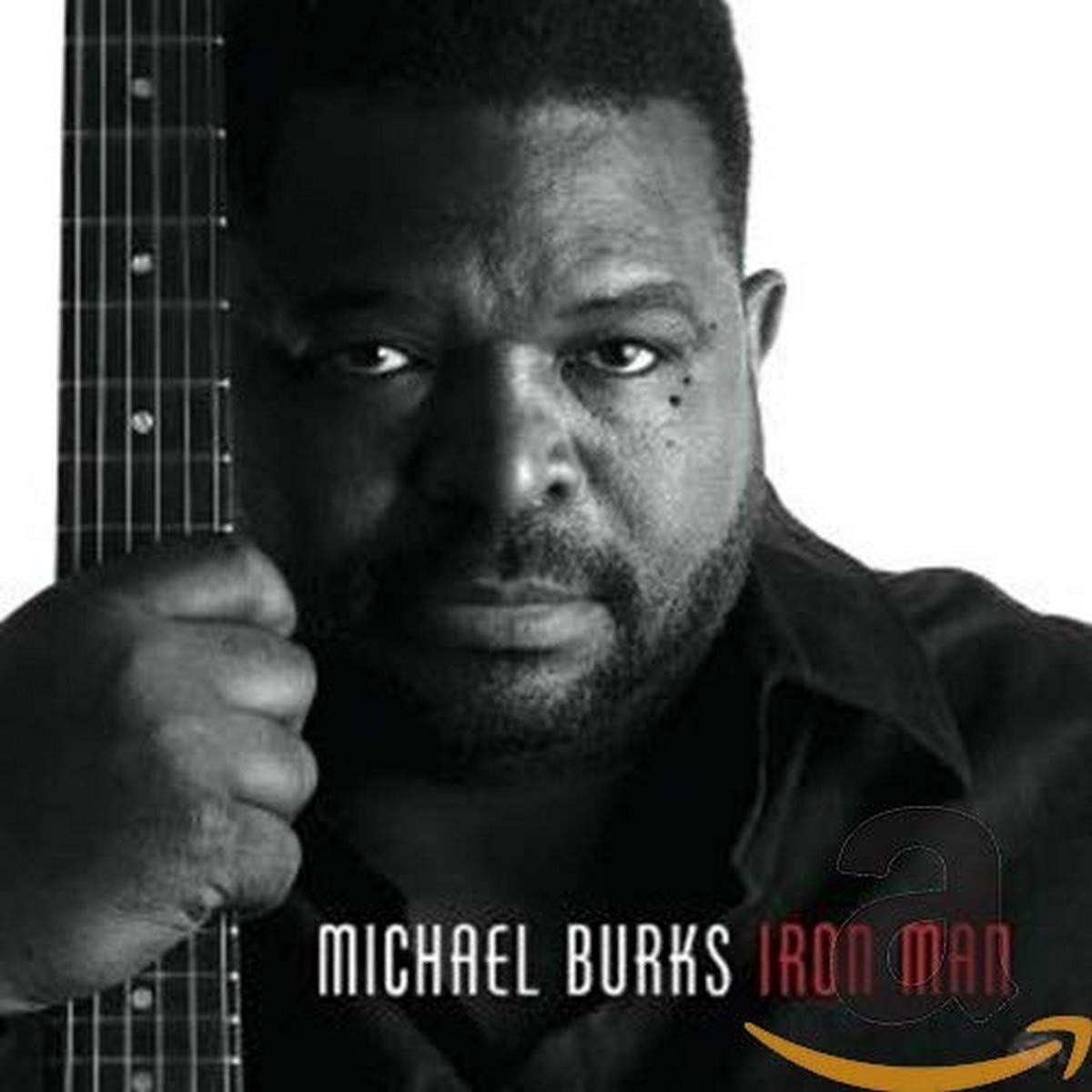 From his powerhouse recordings to his hard-hitting live show, it's easy to see why Michael Burks' nickname is IRON MAN. He's the blues fan's version of a sure thing-always ready to kick-start a party with his fearsome guitar attack and deep, soul-packed vocals. One of the brightest young lights in the blues world and a constant draw on the road, Michael's last release, I SMELL SMOKE, has scanned over 12,000 units since 2003. His latest album, IRON MAN, is a potent dose of contemporary blues, almost crushing in it's intensity. Burks wields his axe like a man possessed, breathing fire into every track, whether it's the charging rocker "Quiet Little Town," the chilling blues of "Icepick Through My Heart" or his sizzling take on Free's "Fire and Water".

...he blasts through licks like Clapton used to play - think lightning - just because he can. He is a great guitarist. -- Vintage Guitar

Born in Milwaukee in 1957, Michael entered the world with blues in his blood. Joe Burks, Michael's grandfather, played acoustic Delta blues guitar in his hometown of Camden, Arkansas. Michael's father, Frederick, was a bass player. For years, Frederick Burks worked in Milwaukee steel mills and refineries during the day and spent his evenings performing in the city's smoky, dimly-lit blues clubs, often backing harmonica legend Sonny Boy Williamson II, as well as other touring blues stars and local front men.

Michael first held a guitar when he was two years old. By the age of five, he was diligently studying his father's 45s. And Michael kept practicing, and by the time he was six, he played his first gig during a trip to his family's hometown in Arkansas. The fledgling guitarist took the stage with his cousin's band and thrilled an unsuspecting audience.

In the early 1970s, Frederick Burks moved his family back to their southern home. There, Michael and his siblings helped their father build the Bradley Ferry Country Club - a 300-seat juke joint. By this time Michael was fronting his own band as well as backing several of the blues and Ramp;B greats that passed through town. Johnnie Taylor and O.V. Wright were just two of the luminaries to call on Michael's services. Business at the Bradley Ferry thrived for years, with Michael Burks leading the house band every Thursday through Saturday.

"p" When the Bradley Ferry finally closed in the mid-1980s, Michael needed to find a day job. For over a decade he worked as a mechanical technician for Lockheed-Martin; at one point during his stint with the advanced technology corporation he even built missile components. But Michael's desire to perform remained strong, and in 1994 he formed a new band and began playing clubs and regional festivals. Despite his not having a record, the diesel-powered energy of Michael's performances began to earn him festival offers from Florida to California. Fortunately, Michael's boss was a blues lover. He recognized Michael's ability and encouraged it, giving Burks the flexibility of long weekends in order to tour. On more than a few occasions, Lockheed even entertained its clients by flying them to Michael's festival appearances.

Michael released his self-produced debut CD, From The Inside Out, in 1997. The album confidently announced Michael's intention to take the blues world by storm. Burks joined the Alligator family in 2001 and released the critically acclaimed "i"Make It Rain. The "i"Chicago Sun-Times called the album "chilling and heartfelt." "i"Billboard agreed, declaring, "Burks is a powerhouse blues guitar slinger...he blasts through licks like Clapton used to play-think lightning-just because he can. He is a great guitarist." "i"Vintage Guitar said, "Gospel-ringed, sweet and nasty. Burks will warm your heart at the same time he puts a chill down your back."

"p" His next album, "i"I Smell Smoke, featured songs fueled by Burks' feral guitar playing and tough, soulful vocals. As raw and passionate as ever, Burks played with the precision and dedication of the seasoned veteran that he is. Living Blues said, "Burks' fretwork is skin-tight yet emotionally expressive. His voice is dusky and sensual yet shot through with virility. Burks burns his signature onto almost everything he touches with aching passion and the probing intensity of his guitar. He has the ability and the imagination to fuse the best of the old and the new." Burks received three Blues Music Award nominations for his work on the CD, including Contemporary Blues Album Of The Year and Blues Song Of The Year for the title track.

Direct link to the article So many little design helper sites!

I had one of those little single-serving designer helper sites bookmarked the other day: getwaves.io. Randomized SVG waves! Lots of cool options! Easy to customize! Easy to copy and paste! Well played, z creative labs.

HTML is Not a Programming Language?

Introduction to the Solid JavaScript Library

Choice Words about the Upcoming Deprecation of JavaScript Dialogs

Three Buggy React Code Examples and How to Fix Them

Just last week I got one of those really?! 🤨 faces when this fact came up in conversation amongst smart and engaged fellow web developers: there is no browser choice on iOS. It’s all Safari. You can download apps that …

Web Unleashed is Back! (Use Coupon Code “CSS-Tricks” for 50% Off)

The lineup is amazing. You’ll hear from leaders in the industry, including Ethan Marcotte, Rachel Andrew, …

I enjoy little frameworks like Tonic. It’s essentially syntactic sugar over <web-components /> to make them feel easier to use. Define a Class, template literal an HTML template, probably some other fancy helpers, and you’ve got a component …

Chris Coyier on Sep 27, 2021
Direct link to the article Collecting Email Signups With the Notion API

A lot of people these days are setting up their own newsletters. You’ve got the current big names like Substack and MailChimp, companies like Twitter are getting into it with Revue, and even Facebook is getting into the …

Ravgeet Dhillon on Sep 27, 2021
Direct link to the article Systems for z-index

Say you have a z-index bug. Something is being covered up by something else. In my experience, a typical solution is to put position: relative on the thing so z-index works in the first place, and maybe rejigger the z-index…

Chris Coyier on Sep 24, 2021
Direct link to the article The Self Provisioning Runtime

The Self Provisioning Runtime

Big thoughts on where the industry is headed from Shawn Wang:

Advancements in two fields — programming languages and cloud infrastructure — will converge in a single paradigm: where all resources required by a program will be automatically provisioned, and

…
Shared by Chris Coyier on Sep 24, 2021
Direct link to the article Comparing Methods for Appending and Inserting With JavaScript

Comparing Methods for Appending and Inserting With JavaScript

Let’s say we want to add something to a webpage after the initial load. JavaScript gives us a variety of tools. Perhaps you’ve used some of them, like append, appendChild, insertAdjacentHTML, or innerHTML.

Frontend Masters has been our learning partner for a couple of years now. I love it. If you need structured learning to up your web development skills, Frontend Masters is the place. It works so well because we don’t offer …

Chris Coyier on Sep 24, 2021
Direct link to the article What is Your Page Title on a Google Search Engine Results Page?

What is Your Page Title on a Google Search Engine Results Page?

Whatever Google wants it to be. I always thought it was exactly what your <title> element was. Perhaps in lieu of that, what the first <h1> on the page is. But recently I noticed some pages on this site that …

Chris Coyier on Sep 23, 2021
Direct link to the article padding-block

padding-block is a CSS logical shorthand property that combines the padding-block-start and padding-block-end properties into a single declaration, creating space around an element’s content in the block (top and bottom) direction.

padding-inline is a CSS logical shorthand property that combines the padding-inline-start and padding-inline-end properties into a single declaration, creating space around an element’s content in the inline (top and bottom) direction.

Frontend Masters is the best place to get it. They have courses on all the most important front-end technologies, from React to CSS, from Vue to D3, and beyond with Node.js and Full Stack.

Another Collection of Interesting Facts About CSS Grid

#114: Let’s Do Simple Stuff to Make Our Websites Faster

The Expanding Gamut of Color on the Web

Curved Text Along a Path