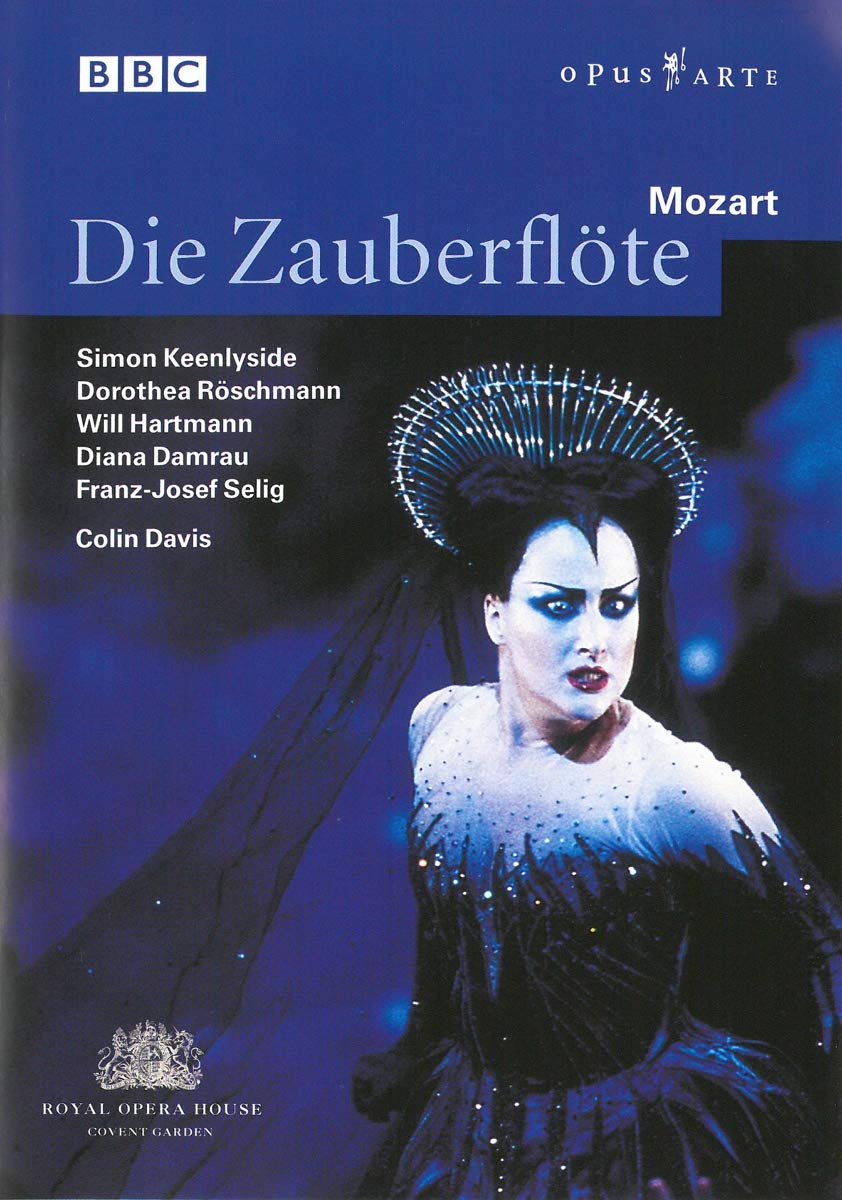 Press Reviews
"This production's slow journey from darkness into the lightâ¦works well on the small screen, not least thanks to high-definition camera work and Sue Judd's inspired direction for television. The real magic, though, is supplied by the onstage cast...In Dorothea Röschmann's hands, Pamina emerges not so much a powerless victim of Fate but more as a passionate woman prepared to suffer in the nameof love. Her natural command of the stage is sagely employed by McVicar...Diana Damrau's supremely sung Queen of the Night oozes class, while Simon Keenlyside's profoundly human, touchingly sympathetic view of Papageno deserves an Olivier Award." (Classic fM)

"...a mellow warmth that was deeply satisfying. Simon Keenlyside...a triumph as quite the most engaging Papageno I have ever encountered...With an exceptional Queen of the Night, Diana Damrou, this is an evening no Mozart lover should miss..." (The Mail on Sunday)

ItÃÂs hard to find a DVD version of MozartÃÂs Die ZauberflÃÂ¶te thatÃÂs as well sung as this 2003 Covent Garden production. Led by the eminent Mozartian, Sir Colin Davis, orchestra and singers present a warm, often intense vision of the opera, not as the fairy tale itÃÂs often taken for, but as a human drama of the passage from misguided beliefs to mature knowledge of self. Diana Damrau is the Queen of the Night for our time, with show-stopping bravura singing that tosses off the scoreÃÂs terrifying high notes with almost casual abandon. Her acting and her fright outfit never leave you in doubt that sheÃÂs the evil presence here, even when sheÃÂs pretending to be a good mom concerned about her daughter, Pamina. Dorothea RÃÂ¶schmann is superb, floating pianissimo notes to die for and singing with a beautifully rounded soprano allied to a dramatic sense that make her Ach, ich fuhl's so moving. Will Hartman is a virile Tamino, a bit heavier of voice than most of the lyric tenors who take the role, but singing well. Like most TaminoÃÂs, heÃÂs upstaged by Papageno, the bird-catcher whoÃÂs his sidekick. Baritone Simon Keenlyside offers the best-sung Papageno one could hope to hear, and while heÃÂs funny in many of his more physical scenes, he replaces the usual clownish buffoon with an earth-bound Everyman. The noble Sarastro, the loversÃÂ guide to self-realization, is well sung by Franz-Josef Selig, whose ample bass easily encompasses the low Fs that make most basses sound strained.

"p"The smaller roles are done well, too. Ailish Tynan has a romp as Papagena; the evil Monostatos is done to vocal and acting perfection by Adrian Thompson, the QueenÃÂs Three Ladies are well-matched and appropriately edgy, and the Temple Priests are convincingly sung and acted. This production of "i"Die ZauberflÃÂ¶te is a dark one. Producer David McVicar and conductor Davis reject the relatively recent transformation of the opera into a Disney-like romp for kids. The comic element in the opera is there, but its philosophical underpinnings--humanityÃÂs fitful progress to a higher plane ÃÂ are paramount. There are still plenty of laughs with the fake dragon that pursues Tamino at the operaÃÂs opening and PapagenoÃÂs funny business with a bird, among other chuckle-inducing scenes. But the productionÃÂs Stygian backgrounds make for an oppressive setting. When light enters, as in the pomp of SarastroÃÂs entry or the blazing yellow disc of the sun that conquers darkness, the operaÃÂs meanings are crystal-clear. Most of the characters wear 18th Century outfits, to comic effect as MonostatosÃÂ heavy makeup, lipsticked mouth, and elaborate wig. But there are occasional incongruities: TaminoÃÂs smock, the Three BoysÃÂ knit sweaters and short pants, and PapaganaÃÂs mangy fur coat, among others. TheyÃÂre well intregrated into the staging so they donÃÂt jar. Nor, aside from the occasional too-tight closeups, does the video direction. In the special features, Davis speaks of the operaÃÂs tension between "lighthearted music and the seriousness of the story," and all elements of this production fuse those key aspects in a way that makes this DVD a joy to hear and watch. "i"Dan Davis "p" "i"Die ZauberflÃÂ¶te is an all-regions 2-disc set in 16:9 ratio. Sound options include Dolby Stereo and 5.1 Surround. Sung in German with subtitles in English and Spanish. Extras include an illustrated synopsis, a behind the scenes feature of the production, and Sir Colin Davis talking about "i"Die ZauberflÃÂ¶te

literary devices refers to the typical structures used by writers in their works to convey his or her messages in a simple manner to the readers.  When employed properly, the different literary devices help readers to appreciate, interpret and analyze a literary work. Below is a list of literary devices with detailed definition and examples.