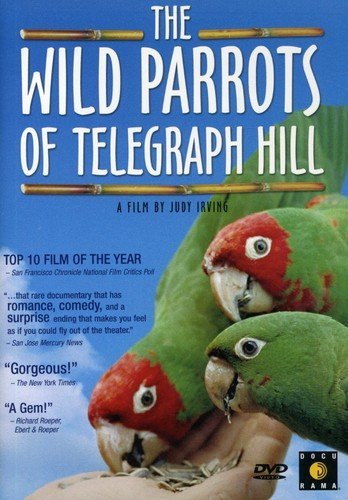 The Wild Parrots of Telegraph Hill

The Wild Parrots of Telegraph Hill

This documentary follows the ups-and-downs of a flock of urban parrots in San Francisco and the aging bohemian who befriends, feeds and names them. Along the way, we meet many unforgettable characters and learn just how wondrously similar the human and animal worlds really are.

Quiet patience and an observant eye turn a seemingly unpromising subject into a rich and fascinating movie. The Wild Parrots of Telegraph Hill captures the life of Mark Bittner, a gentle homeless musician who's befriended a flock of wild parrots in a neighborhood of San Francisco. Following Bittner, the

"tr"camera zooms in on individual parrots, revealing their individual personalities and the traits of their species. This leads to Bittner's own life, the network of friendships that support him, and the ways in which the parrots--a non-native species--interact with both the natural ecosystem and the city government; just about every topic opens up another until a flock of colorful birds represents a microcosm of nature and society.

Filmmaker Judy Irving has created an exemplary documentary simply by paying attention to the details of the world around her subject.

Everything you expect from a Hollywood blockbuster--romance, violence, humor, sorrow, strong personalities in conflict--is here in spades, except that the heroes and heroines have bright red and green feathers. Utterly rewarding. --Bret Fetzer

Product Description:
An "engrossing, delightful film" (The Washington Post), The Wild Parrots of Telegraph Hill is the bonafide sleeper theatrical hit of the year. The film's endearing guide is Mark Bittner, an aging bohemian, but the supporting cast members, a rambunctious flock of urban parrots, are the true stars, and their surprisingly humanlike behavior makes for a wondrous and rare experience. The film follows the ups-and-downs of these wild birds within the green niches of San Francisco as Bittner befriends, feeds, and names the members of the flock. Along the way, we meet many unforgettable characters: among them Connor, the grouchy yet lovable outcast of the flock, crying for a mate but luckless in his pursuits, and "the lovers," Picasso and Sophie, inseparable until Sophie is forced into mourning when Picasso disappears. More than a mere birdwatcher, Bittner finds solace in his immersion with these strikingly beautiful creatures - but how will he cope when he's evicted from his sanctuary and forced to live away from the parrots? Packed with romance, comedy and a surprise ending that "makes you feel like you could fly out of the theater" (San Jose Mercury News), The Wild Parrots of Telegraph Hill shows just how wondrously similar the human and animal worlds really can be.

Ned: There's a scene early on where you ask, "Why don't you cut your hair?" Mark says, "I'm not going to cut my hair until I have a girlfriend." So I wondered, "Will there be a scene at the end where he cuts his hair?" Did you know what was going to happen when you recorded that scene?

Judy: I recorded that close to the beginning of the project. I didn't know how things would end up. As I was editing, I knew what I was doing, though. Like in dramatic films, I wanted to have setups and payoffs throughout the movie. That was one of them. I also wanted folks almost to forget it after it happened.

"p""strong"Ned: I was struck by the narrative quality of Parrots. Itâs almost like a fiction film. Thereâs Connor, the outcast. He's like the tough guy who turns out to have a heart of gold, sticking up for the injured birds as their fellow cherry heads attack them. Then he suffers his apparent tragic demiseâlike the brother in Slumdog Millionaire.

Judy: Connor was the classic outsider. I didnât make anything up. The cherry heads didn't like him because of his blue head. Discrimination happens even in the bird world.

"p""strong"Ned: Another part of the story arc was where you create this beautiful world, and then it has to end. Mark has to leave. What's going to happen to the birds?

Judy: That all happened while I was filming. Mark was living in the cottage, and the owners had to ask him to move because it was literally sliding down the hill. I knew that might happen when I started filming. I just hoped Iâd get enough shot before he had to go. So his moving became part of the story. But in a documentary you can't control those things. There's no script. That's the risk you take. You just hope events will unfold in a way that makes a good story. I much prefer storyline documentaries to standard âtalking heads and b-rollâ type documentaries

Ned: In the movie youâre not antagonistic exactly, but you keep asking Mark questions like, how come you don't get a job? Gradually, that changes. Thereâs more to him than you thought.

"p""strong"Judy: When I first met Mark, I wasn't sure he was movie material, frankly. (Laughs.) After awhile I realized he was a great storyteller, with a good voice and screen presence. I needed to ask the questions that the audience would ask.

Ned: The film is not at all what most people expect it to be.

Judy: Right. And because of the title, a lot of guys arenât interested in watching it. Then their girlfriends or wives drag them to it, and theyâre moved. They find out that it's about much more than just parrots. It's about personality, consciousness, and life and death.

Filmmaker Judy Irving latched onto an original subject...and just when we re prepared for the movie to end sadly, there s a smiley-face capper. --USA Today

It s a lovely film, one of the most uplifting of 2005... --San Francisco Chronicle