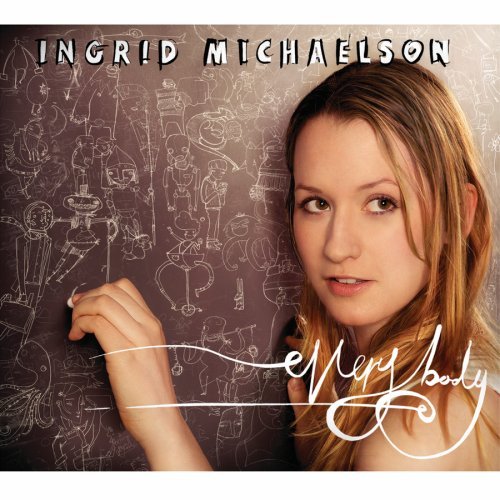 Highly anticipated 2009 album from the singer/songwriter. Everybody is the eagerly-awaited follow-up to her 2007 release, Girls and Boys, which spawned the hit single 'The Way I Am' and launched Ingrid into the mainstream consciousness. The New York Times describes Michaelson's unique musical approach as 'soulful, idiosyncratic,' while Rolling Stone loves her 'sweet but mellow lounge-pop harmonies,' and Entertainment Weekly hails Michaelson as 'a deft mistress of quirk folk: a grassroots phenomenon.' Features 12 tracks including the first single 'Maybe'.

"This is my big girl record," declares Ingrid Michaelson of Everybody, her second full-length CD out August 25. "It's almost a loss of innocence. I'm 29 years old and I shouldn't worry if my mom and dad know that I kissed a boy from listening to one of my songs, but I remember on my first album I was like, 'Can I say that?'" On that first album, 2007's critically lauded Girls and Boys, the singer/songwriter infiltrated the mainstream airways with smart love songs like "The Way I Am," a single that has gone on to sell over one million copies worldwide. With Everybody, she brings a newfound wisdom and maturity to her music, gleaned from touring the world. "This album is very autobiographical, it's about the past year in a half of my life and choices that I've made," Michaelson says. "I had other songs that weren't about that and I purposely didn't put them on the album. If it didn't fit the record I kicked it off!" Born in New York City and raised by her mother, a sculptor, and her father, a classical composer, Ingrid has artistry in her DNA. At four she began taking piano lessons but it wasn't until after she graduated college with a degree in musical theatre and was touring the country in a theater troupe that she began to write the dreamy, pensive-but-poppy songs that would connect with millions. Her music taps into universal themes like self-doubt, betrayal, and of course love, but her spirit is fiercely indie; Ingrid's last studio album, 2007's Girls and Boys, was released on the label she founded, Cabin 24 Records. The record's soaring delicacy caught the ear of Grey's Anatomy's music supervisor and after featuring several of her songs in earlier episodes, Ingrid's heart wrenching ode to emotional paralysis "Keep Breathing" was chosen to soundtrack the show's 2007 season finale, which more than 25 million teary-eyed fans watched. Afterwards, everyone went Ingrid crazy: Her lyrics and name were #1 and #2 on Google's most searched items list, Girls and Boys climbed the iTunes charts and she began to earn national media attention. That fall, when Ingrid's song "The Way I Am" was featured in Old Navy's commercial, it propelled Girls and Boys into the Billboard Top 200 and the record hit #1 on both the Heatseeker and Alternative New Artist Album charts. Ingrid's MySpace page registered 90,000 hits per day and she reached the #4 song overall on iTunes - all unprecedented feats for an independent release. Since then, Ingrid has continued to chart on the Billboard Top 200 multiple times selling over 300,000 copies of Girls and Boys. Since the release of Girls and Boys two short years ago, Ingrid has appeared on Good Morning America, Live with Regis amp; Kelly, Late Night With Conan O'Brien, The Tonight Show With Jay Leno, NPR's Talk of the Nation, Fuse TV and was a VH1 You Oughta Know artist. She has also been the subject of print features in publications as varied as the Wall Street Journal, The New York Times, The New Yorker, Rolling Stone, Entertainment Weekly and Billboard. Ingrid's rise was so quick she didn't have time to ease into touring. Within a few months the singer, who had never played more than a few local shows at a time, found herself on tour with Dave Matthews and Jason Mraz, as was selling out 1500-capacity club venues on her own. Ingrid adjusted with typical alacrity and good-humor, honing a performance style that's very much in keeping with her quirky personality. Her sets routinely include her now-plentiful list of hits plus witty covers of songs like "Ice Ice Baby," and the theme song from The Fresh Prince of Bel-Air. With all her heady success Ingrid could easily have gone diva by now but that's not her style. Instead of lounging by a hotel pool demanding bowls of green Jolly Ranchers or falling out of clubs at four in the morning in foreign cities she amuses herself by making up dances to Jordin Sparks songs with her roommate, then putting them on YouTube. And she keeps herself creatively fresh by insisting on a similar level of commitment to individualism in the way she approaches her work. "I did most of the vocals for the new record at Shelter Island studios but I ended up re-doing them in my producer's closet, which is his vocal booth," Ingrid says of her work with producer Dan Romer. "I felt better being in there for some reason. I wrote [first single] "Maybe" two months ago. It wasn't going to be on the record. A song we threw together at the last minute ended up being the single. The other single "Everybody" - we recorded the drums at the fancy studio and sang at the fancy studio, but everything has been redone at Dan's house anyway. When I was in Dan's house there was no pressure." It's exactly this insistence on keeping things unflinchingly honest, regardless of professional success or personal heartache that defines Ingrid's connection to her fans. She rose to fame by singing about her faith in love, and now she's written an album that questions that faith, which she knows is risky but she also knows its right. "With the first album I was just learning how to use my tools. Now I feel like I can sharpen my skills and say things how I want to say them. Now I feel free to say things about myself that I would have maybe been embarrassed about before. It's like a big old therapy session."