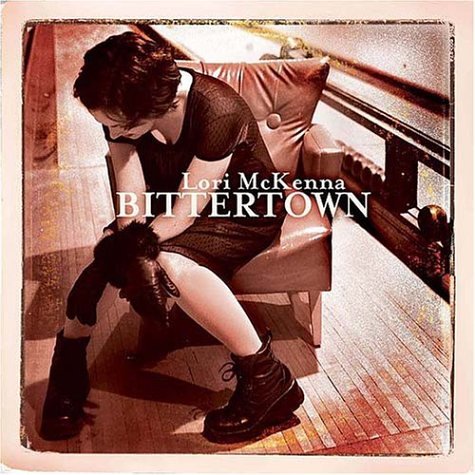 This songwriter and mother of four, who lives a stones throw from the town she grew up in, doesn't fit into any stereotype. She's garnered comparisons to Lucinda Williams, Bruce Springsteen, Dashboard Confessional, and Roseanne Cash. Her songs, as solid as Georgia oak, are played and sung with an emotional grit under the nails that comes from digging in life's mundane and less illuminated holes. These songs grab you with Lori's signature strident, soulful, and unapologetic vocals sharing earnest observations and stories of growing up and growing old, of loves and losses, winners and losers, guns and god, and drinkers and dreamers in a town that is resting uncomfortably between its blue collar roots and modern suburbia. Incapable of artifice, Lori McKenna speaks of the bitter and the sweet, but doesn't simply write songs, she documents her life, and in turn ours, in word and melody. Meet Lori McKenna and welcome to Bittertown

The crash of the snare drum and the slam of guitars that kick off Lori McKenna's latest release Bittertown (Signature Sounds) herald the arrival of the latest in a line of hard-bitten musical chroniclers of the American experience. However, unlike many of her more worldly musical peers, McKenna doesn't live the glamorous life of the typical rock star. Instead, with her plumber husband, four children, and the family's Ford minivan that doubles as her tour bus, McKenna lives in a modest house a stone's throw from the one she grew up in on a dead-end road in the working class, South Shore town of Stoughton, Massachusetts.

The youngest of six children, McKenna lost her mother to illness when she was six years old. Taking solace, she began writing poetry in her bedroom. At the age of nineteen she married her high-school sweetheart and had her first child. Settling into her life as a young mother and wife, she dropped out of community college, got a job as a receptionist and sold Tupperware. Finally, when she was twenty-seven, McKenna played her first gig at an open-mic night at the local bar. With a Martin guitar that she borrowed from her brother and no formal musical training, she got up in front of the small audience and performed her own songs for the very first time. From that point forward, she was hooked.

Now, a quarter-century after Bruce Springsteen's Darkness on the Edge of Town mined similar territory, McKenna's new album Bittertown chronicles the struggles for faith, love, lost dreams, and redemption among many who still see high school as the best years of their lives in thirteen loosely connected small town anthems. Inspired by the everyday lives of her neighbors, relatives, and friends, McKenna creates intimate portraits of hope and regret that define the album. From the first track to the last, McKenna lays her soul bare with a brassy heart and harrowing conviction. Still, for a woman who never really left her hometown, McKenna's songwriting transcends regionalism. Connecting the dots between Bobbie Ann Mason's rural South and Rick Moody's New England, her songs find the common ground between them in contemporary America's post-industrial landscape, where promises of the American Dream often disappear in the shadows of McMansions available only to the few.

Lydia Figes speaks to the Welsh-Ghanaian textile artist about her practice.

Celebrating the flair and wit of the beloved Glaswegian.

Art UK is collaborating with over 140 artists to raise funds to support our work democratising access to the nation's art.

Explore over 3,300 venues with public art collections across the UK.

Click on the map markers to discover incredible art all across the country.

Mixing It Up: what does contemporary painting look like?

Learn more about the artist and her avant-garde lifestyle in Paris.

Art UK is collaborating with over 140 artists to raise funds to support our work democratising access to the nation's art.