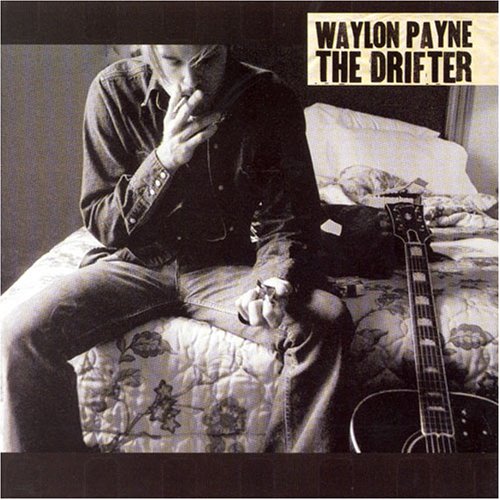 One of life s many paradoxes is that it s the unattached who are often the most vividly expressive about the search for connection -- and the seemingly rootless who care the most about roots. There s abundant proof of this in The Drifter, WAYLON PAYNE s Republic/Universal debut album, a work of deep emotion and authenticity, forged with the most elemental tools of roots rock, blues and hardcore country. I drift in and out of situations, and I have my entire life, says the 31-year-old Payne, son of Grammy winner Sammi Smith ( Help Me Make it Through the Night ) and longtime Willie Nelson guitarist Jody Payne; and the godson and namesake of Waylon Jennings. I ve never known a place I can call home, never known a place that felt safe to me, other than myself. Now I find great comfort, and great strength and safety in my music. All you have to do is listen to figure out that it s true. The music of The Drifter is anything but aimless. Its vignettes play like an unexpectedly gripping first indie film -- rough edges, raw nerves, emotional train wrecks and all, as in the wasted, enraged and obsessive On and On. With unvarnished, focused production by accomplished guitarist and songwriter, Keith Gattis, zeroing in on Payne s intensely personal lyrics, Her and The Bottom are headlong dives into regret. The haunted, elegiac title track resonates like a war story, and Running from the Rain captures a classic sentiment with an unconventional sound. By comparison, Pretender, which has already seen early exposure on Los Angeles alternative radio, is a song for the days when one can make peace with the uncertainty of the future. Elsewhere on the album, Jesus on a Greyhound (written by Shelby Lynne and Glen Ballard) and Christian consider the unquenchable need for a larger truth, wherever it may be found. They, along with the compassionate and tender Momma Drive On, address the seeker in all of us. If any album can redeem pop music s all-too-frequent imbalance between charisma and substance, here it is. In conversation, Waylon makes constant intuitive connections between a life lived and the music that comes out of it, attesting to the hard-won personal discoveries reflected in his album. Payne says, My Aunt Yvonne and Uncle Bob raised me in Dallas, Texas, from the time I was about four months old, till I was 17 or 18. Every summer when I was out on tour with my Mama, was the only time we used to hang out. Music s just always been there-me -- it was the only real thing that I remember. My mama s record albums, Barbara Mandrell, Willie Nelson, Connie Smith, George Jones, and then there was the Allman Brothers, Lynyrd Skynyrd. For Waylon Payne, The Drifter represents both emotional catharsis and a coming to terms with the things that can t ever be predicted or pinned down. As stages of life come along, you find that people come in and out of your life for a reason. I never try to explain that; I just know that it happens. All you have to do is make yourself open and available for them and they will be there. That s why I have no doubts. This record has already been a major achievement in our lives.

WP makes the dilettante's light shine bright, i.e., he doesn't work much at having a music career--as this 're-release' of a 4-year-old record shows--cuz he doesnt have to. His daddy Jody Payne logged enough hours gettin on the road again with Willie that young Waylon can coast, learning to live and die in L.A. But it's the casual nature of this record that makes it so special. He's the quietest, sweetest little outlaw you're likely to find. He channels the lovin' side of his godfather (THE Waylon), sounding plenty lonesome but not yet ornery or mean. Just one sip of "All the Way to the Bottom", which was covered by Charlie Robison, and you'll be hooked. The boy can write! And sing you to sleep through a lost-weekend Sunday morning. Leave your hat-acts and red-dirt jeezus freaks at home and go find some Payne. peace. DK --Lonestarmusic.com

Album: The Drifter Artist: Waylon Payne Re-issue: March 11, 2008 Review: Must Have, Excellent Reviewed by: Brad Influences: Ryan Adams, Jack Ingram, Waylon Jennings, Willie Nelson, Walt Wilkins, Charlie Robison, Pat Green, Wilco. This is one of those albums where you don't skip a single song and the whole thing feels like one big movie. It's not an intentional concept record but it truly tells a story from the first track "Her" to the last tune, which is the title track. Waylon had a hand in writing 10 of the 11 songs. The only exception being "Jesus on a Greyhound" which was penned by Shelby Lynne and famed Alanis Morissette and Aerosmith collaborator Glen Ballard. The record was produced by acclaimed singer/songwriter Keith Gattis who's own work has been compared to that of a more mellow, less honky tonk Dwight Yoakam. A tight studio band led by Waylon's extraordinarily strong vocals, his dad on guitar and Mr. Gattis on guitars, percussion and background vocals lay down nice layered and textured backgrounds for Payne's lush vocals. What do you get when you add music royalty in Waylon Payne to Shelby Lynne, Keith Gattis and Glen Ballard? A simply amazing album. The best new record I've heard thus far this year. --Galleywinter

REPROCELL will participate at

REPROCELL will participate at

Latest on our blog

Go to our blog